Spreading our message in Japan

MVFHR board member Toshi Kazama recently came back from three weeks in Japan, where he gave several public presentations, met with members of Ocean (MVFHR's Japanese affiliate) and with new victim's family members, and worked with local and national organizers to plan an MVFHR speaking tour in Japan in 2010. MVFHR's ability to spread the message of victim opposition to the death penalty in Japan (and other Asian countries) results primarily from Toshi's vision, energy, and ability to connect deeply and effectively with the people he meets.

Toshi's public presentations received particularly good and extensive media coverage on this trip, which Toshi attributes to increased interest in the subject of the death penalty folllowing a change in Japanese law under which groups of lay judges (i.e., ordinary citizens) will be largely responsible for imposing death sentences. The Japanese public overwhelming favors the death penalty but is also reluctant to get involved directly by serving as lay judges, Toshi says, and the time may be right for a closer look at the assumptions and practices surrounding the death penalty.

Here are some photos from the trip, with Toshi's comments. 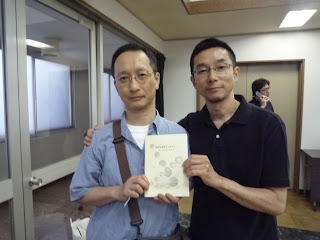 "I am standing with Mr. Shibata (left), the man who took the lead in bringing out a Japanese edition of MVFHR's Gallery of Victims' Stories. Mr. Shibata is from the Religious Network Against the Death Penalty. He translated several pages from MVFHR's Gallery of Victims' Stories into Japanese and has donated some of the proceeds from the sale of the booklet to Ocean and to MVFHR. During this trip, I was able to attend a board meeting of the Religious Network and to discuss their involvement in next year's MVFHR speaking tour." 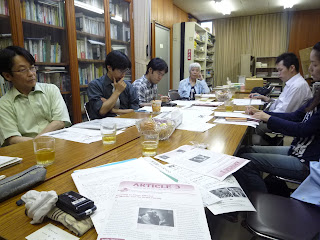 "Here is a photo of the Religious Network meeting, with MVFHR literature." 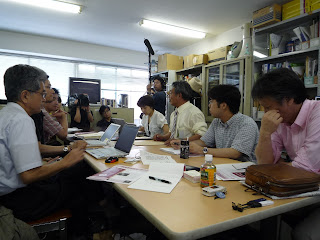 "This photo shows MVFHR's Japanese affiliate, Ocean, having a board meeting that is being filmed by the public television network, NHK. The television network is making a documentary about Mr. Harada, the victim's family member who founded Ocean, and we agreed to allow the board meeting to be filmed because it is so important to show Japanese audiences that there are many types of victims and that victims may change their mind about the death penalty over time (as Mr. Harada did). So much of Japanese support for the death penalty comes from people believing that it is good for victims' families. The producer of the NHK documentary is a long-time friend of mine and I have been giving him a great deal of background information." 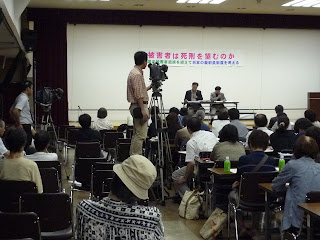 "That afternoon, following the board meeting, Ocean and the group Forum 90 held a panel presentation that included a Korean victim's family member who opposes the death penalty (and who had participated in the Texas Journey of Hope). About 200 people came to this event and the media coverage was very good. We are glad to be making connections with Korean victims' family members and hope to vist there as well."

Our report from Japan continues tomorrow!
at 7:07 AM