"I need people to listen to me"

From today's Daily Record (an Ohio newspaper), "Testimony asks state to abolish death penalty; it creates 'more victims'":
COLUMBUS -- Twenty-seven years ago, Mary Jane Stout and her husband, Norman, allowed John David Stumpf and another man into their Guernsey County home to use the telephone.

In response, Stumpf shot and killed Mary Jane and attempted to kill her husband with repeated gunshots to the head.

That was in May 1984. Stumpf has been on Death Row since that year while his case works its way through the requisite state and federal appeals before an execution date is set.

On Wednesday, the couple's son asked state lawmakers to abolish Ohio's death penalty, saying the lengthy legal process has brought nothing but pain and constant reminders of the crime rather than closure.

"We need certainty, we need healing," Chris Stout told the House's criminal justice committee. "We need to not be hauled into court again and again for 27 years and ... traumatized over and over."

He added, "I need this system to stop, period. I need the death penalty to be over and I need people to listen to me when I say, do not do this to me or my family. Don't kill John David Stumpf because of me. We've been through enough, and we want it to end. All this system does is create more victims. ..."

Stout was one of more than a dozen people providing testimony in favor of legislation that would end capital punishment in the state.

Speakers included former Death Row inmates who were innocent of the charges against them, attorneys who talked about the costs and inequity in administering the death penalty and family members of murder victims who said the system is not working.

A Human Rights Day thank you 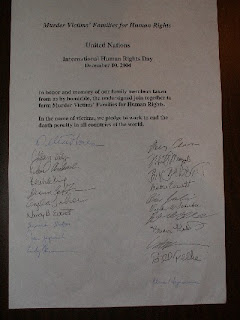 Seven years ago, at the UN Church Plaza in New York City, a group gathered to celebrate the official launch of Murder Victims' Families for Human Rights. Here's a photo of the Founders" Pledge, which says, "In honor and memory of our family members taken from us by homicide, the undersigned join together to form Murder Victims' Families for Human Rights. In the name of victims we pledge to work to end the death penalty in all countries of the world."
It was, of course, a deliberate choice to launch MVFHR on December 10th, International Human Rights Day, the anniversary of the signing of the Universal Declaration of Human Rights. In our first mailing shortly after the founding ceremony, we wrote:
The Universal Declaration of Human Rights, a document that sets forth the most basic principles regarding the value of human life and the way human beings ought to treat one another, was inspired by victims, demanded by victims. It grew out of the suffering of millions of civilians murdered under the brutal regimes of the Second World War, and its adoption on December 10, 1948 was a way to honor the loss of these lives, and an attempt to give meaning to the loss, by asserting that such violations are neither moral nor permissible under any nation or regime.

Now is the time to raise our voices again and insist that violations of human life in the form of the death penalty or other state killings are not permissible under any nation or regime. It is time to call for the abolition of the death penalty because the only way to uphold human rights is to uphold them in all cases, universally.

We believe that survivors of homicide victims have a recognized stake in the debate over how societies respond to murder and have the moral authority to call for a consistent human rights ethic as part of that response. Murder Victims’ Families for Human Rights is the answer to that call.
Now as we observe International Human Rights Day today, in 2011, we extend our deepest thanks to all MVFHR's members and supporters who have helped answer that call and who have accomplished so much in these seven years.

MVFHR joins the many other organizations that have expressed sadness at the passing of Martina Correia, sister of Troy Davis. Troy Davis was executed in Georgia on September 21st, amid much protest because of his significant claims of innocence. So many joined in the campaign to stop Davis's execution -- not only in the U.S. but around the world as well -- and the campaign was marked by the t-shirts many of the protesters wore, saying "I am Troy Davis." Martina had led that tremendous campaign for many years while battling cancer.
MVFHR's Executive Director Renny Cushing offers these thoughts:
On numerous occasions over the past dozen years, I was fortunte to share a public platform with Martina Correia as we both tried to put a public face on the issue of violence and the death penalty. Martina was more than just an advocate for her brother; she was emblematic of the pain and struggle that all families of death row prisoners experience. Her dignity and quiet strength in both her public work and her private life were inspiring. When I heard of her passing, I thought not just of her but of all the family members of death row prisoners and executed persons and of how many people in the world today could be wearing a t-shirt that reads “I am Martina Correia."
Many others have offered memories and tributes. In a post on the Amnesty International blog, Laura Moye wrote:
Martina fought her deteriorating body every step of the way to hold onto life and to be in this world for her family and for the human family. Her body finally gave out, living eleven years longer than doctors predicted she would. It is unimaginable what stress and hardship she and her family faced having a loved one on death row who was almost executed three times, then finally killed by the state she called home and in the country she served as a military and civilian nurse. Martina’s mother, though in perfect health, died shortly after Troy Davis’ final appeal was denied and a few months before his execution. The families of murder victims and the families of death row prisoners endure enormous pain. The death penalty is horrifically destructive, creating a downward spiral of violence that drags so many people down in its wake. We must end it so that an authentic justice that brings us accountability, healing and a better future can take root and blossom.
And here is a link to Scott Langley's moving tribute and photo series.
at 7:24 AM No comments: