"Many people are damaged when this type of violence takes place," said Renny Cushing in an interview yesterday. Because MVFHR is an organization of family members of homicide vicitms and family members of people who have been executed, we continue to be asked to speak about the wide-ranging impact of murder and specifically about the experience of family members of those who commit violence. MVFHR's Executive Director Renny Cushing was interviewed yesterday on the MIke Huckabee Show (listen to the 10-minute clip here) and on Oklahoma television station KFOR (watch that clip here).
at 8:42 AM No comments:

Texas MVFHR member Lois Robison is featured in this NBC News story, along with Executive Director Renny Cushing and Board President Bud Welch:


By JoNel Aleccia, NBC News
As news crews swarmed outside the tile-roofed house of accused shooter James Eagan Holmes’ parents in an upscale suburb of San Diego, a stranger 1,300 miles away in Texas grieved for those inside.
“I’ve been worried about the family,” said Lois Robison, 78. “I know what it’s like to find out your son has killed several people.”
Last Friday, when Holmes allegedly opened fire in a movie theater in Aurora, Colo., his parents, Robert and Arlene Holmes, were instantly thrust into a club that no one wants to join: family members of notorious killers.
Like the parents of Tucson shooter Jared Loughner, Oklahoma City bomber Timothy McVeigh and Columbine High School killers Dylan Harris and Eric Klebold, they’re quickly becoming pariahs, publicly reviled for raising a monster.
But a group organized on behalf of murder victims’ families urges compassion and understanding for the families of murderers, too.
They suffer in a different way than those who lose loved ones to violence, said Renny Cushing, founder and executive director of Murder Victims' Families for Human Rights, or MVFHR, which has organized support sessions for killers' families.
“I became really painfully aware of the ostracism that takes place,” said Cushing, whose father was murdered in 1988. “Immediately, there’s this thought that families must have done something to cause this, that the apple doesn’t fall far from the tree.”
That’s all too familiar to Robison, a retired third-grade teacher. Her son, Larry Keith Robison, was executed in 2000 in Texas for the grisly murders of five people, including an 11-year-old boy. He had been diagnosed with paranoid schizophrenia at age 21, three years before the 1982 murders.
Though it’s been nearly 30 years since the crime, Robison still clearly recalls the shock and horror of the early days -- and the reaction of some in the community of Burleson, Texas.  Reporters surrounded her home; in ensuing months, some parents asked to have their children removed from her class.
No longer were they Ken and Lois Robison, the local schoolteachers.
“We became the parents of a mass murderer,” said Robison.
It’s a shift that happens quickly as a restless public searches for someone or something to blame for senseless acts of murder, said Cushing.
Indeed, Arlene Holmes, 58, a registered nurse, and Robert Holmes, 61, a scientist, are being publicly reviled. Some Internet commenters have called them “abusive” and suggested that they are responsible for their son's alleged acts.
“Where were YOU Mother why didn’t you take care of him,” read one NBCNews.com comment. “To me it sounds like a bad mother.”
Another expressed “pity” for the family -- but with a twist:
“I know that if it had been one of my sons who did this I would be absolutely shattered (not that it could ever be one of them as there must have been signs.)”
The Holmes family has expressed sorrow for the 12 people killed and 58 injured in the attacks, and, through their lawyer, asked for privacy as they grapple with the situation.
They indicated they would stand by their son through the ordeal.
“I think anyone can imagine how they’re feeling, anyone who’s ever been a parent,” said lawyer and family spokeswoman Lisa Damiani at a press conference Monday.
Families of murderers are grief-stricken after such a tragedy, but, unlike the families of the victims, they may feel they have no right to their feelings, said Bud Welch, whose 23-year-old daughter, Julie, was killed in the Oklahoma City bombings in 1995.
Welch met with Bill McVeigh, the father of Timothy McVeigh, who was executed for the crime.
“It’s really difficult for them, it really is,” said Welch, a member of MVFHR, which opposes the death penalty for murderers. “Bill McVeigh can never say anything publicly about anything Tim did that was nice.”
Instead, the family members of the killers struggle for the rest of their lives with shame and guilt over their loved one’s acts.
“I said, 'Bill, you have nothing to apologize for. You did not do it. You did not contribute to it,' " Welch recalled.
That message has provided some solace to other families of murderers. Welch met with the parents of Eric Harris, one of the two killers who led, and died in, the 1999 Columbine High School shootings.
Public sentiment vilified Wayne and Kathy Harris, Eric’s parents, and also Tom and Sue Klebold, the parents of Dylan Klebold, the other Columbine shooter.
“People were so angry. They said, ‘How were those boys raised?’” Welch said. “They weren’t raised any damn different than any of the kids in Littleton.”
Lois Robison said she and her husband, Ken, now 81, have found comfort and empowerment in speaking out about their son's crime, and about the need for adequate care for mental illness. They had great support from family members and those in the community who knew them, she added.
"When this happened, my husband said 'We can do one of two things,'" Lois Robison recalls. "We can crawl into a cave and pull a rock in there behind us. Or we can tell the truth and try to keep it from happening to someone else.'"
Bud Welch said he’s tempted now to reach out to victims of Aurora, both the families of those who were killed -- and the family of the alleged killer.
“These family members in Aurora, they’re going through so much grief. They need so much help,” he said. “The family of shooter? God only knows they’re going through hell, too.”
at 10:15 AM No comments:

Our hearts are with the victims and their families in Aurora, Colorado today.

MVFHR Board President was interviewed on Democracy Now this morning as part of the show's coverage of the shooting and the question of whether the death penalty will be sought. Bud's comments come toward the end of the program, at about 51 minutes.
at 10:51 AM No comments:

Good news from Singapore and Malaysia

Our Asia Program Director Toshi Kazama reports good news from Singapore and Malaysia this week.  Each country has just taken steps to abolish mandatory death sentences for people convicted of drug trafficking. Here's an article about this news in Malaysia, and here's one from Singapore. 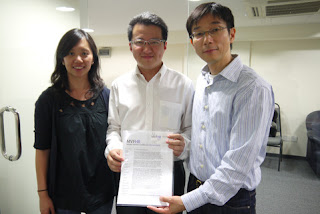 Toshi's visit to Singapore and Malaysia this week is a follow-up to his succesful visit to these countries last fall, when he gave several presentations and met with lawyers and public officials. In this photo, Toshi (right) is standing with Member of Parliament Liew Chin Tong (center) and human rights lawyer Ngeow Chow Ying; they are holding a report from MVFHR, prepared at the request of Justice and Law Minister Aziz, about how various U.S. states have declared a moratorium on the death penalty.
at 1:25 PM No comments:

Our friends at Georgians for Alternatives to the Death Penalty and Amnesty International have put out an urgent request for support to halt the execution of Warren Hill, which is scheduled for July 18. The deadline for signing this petition is tomorow, July 12. Here's Amnesty's quick summary of the situation:

Warren Hill is scheduled to be executed in Georgia on July 18, despite having been ruled "mentally retarded" by a preponderance of the evidence by a Georgia state judge. Executing persons with intellectual disabilities is unconstitutional, and the Georgia Board of Pardons and Paroles has the opportunity and the responsibility to do what courts have been unable to do - prevent this execution and preserve the integrity of Georgia justice.

An op-ed in the Daily Report, a legal publication, notes that the victim's family does not want Warren Hill to be executed:

Hill's final chance for life is to plead for clemency before the Georgia State Board of Pardons and Paroles. The board's discretion to commute Hill's death sentence is Georgia's last chance to prevent an unconscionable and immoral execution.
The board now has the opportunity to show mercy and compassion to Hill by granting clemency and by commuting his sentence to life without parole. The victim's family has expressed its support for commutation. By acceding to their wishes, the board can act as the "fail safe" necessary when the legal machinery of our capital punishment system makes a mistake.
Further, granting mercy to Hill would finally acknowledge the nationally recognized safeguards for defendants with developmental and intellectual disabilities on death row, and protect the constitutionally mandated rights of men and women with these disabilities.