Kate Lowenstein is representing MVFHR in Tokyo today at "No Justice Without Life: The Death Penalty in a Globalized World," a symposium organized by the Italian Community of Sant'Egidio. Here's a description:

The special aim of the Tokyo Symposium: how Japan may be closer to the rest of the World? The broad consensus on the issue found in Tokyo today shows that it is possible to begin to build bridges between the Japanese islands and the world. The same Justice Minister Makoto Taki, renamed by Prime Minister Noda, said three days ago in a Press Conference that Japan, on capital punishment, must come out of its isolation and begin to open to an international dimension.The Conference, realized with the support of the European Commission and hosting the significant contribution of the Vice President of the European Parliament as well as the Ambassador of the European Union to Japan, brings together many of the major Japanese organizations, as Amnesty International, Bar Association, Forum 90, Center for Prisoners’ Rights, ADPAN, Japan Interreligious Network Against the Death Penalty, and others.Including a truly broad range of witnesses and guests from Europe and the United States, Japanese representatives of institutions, of the world of politics, culture, the press, the arts, voices of the great world religious traditions – including the voice of Pope Benedict XVI – but also representatives of the new generations. In this context, the great composer and conductor Ken Ito will offer over his words also his music.Today in Tokyo we will listen to a marvellous polyphonic choir, which will sing a hymn towards the future : No Justice Without Life!
at 10:11 AM No comments:

MVFHR member Lois Robison, whose son Larry was executed in Texas and who has been active in our Prevention, Not Execution project, is quoted extensively in yesterday's story, "Wisconsin Spa Shooting Brings Back Painful Memories for the Moms of Mass Killers."  MVFHR Executive Director Renny Cushing is quoted too:

News of Sunday’s shooting at a spa in Wisconsin brought back painful memories for Lois Robison, more than 1,000 miles away in Burleson, Texas.

Robison’s son, Larry, was executed in 2000 for the brutal murders of five people near Ft. Worth, Texas, in 1982. Every time it happens again, every time a gunman takes to a mall or a Sikh temple or a school playground, bent on rampage, Robison remembers her own son.
This past week, it was the shooting at the Azana Spa in Brookfield, Wis., that triggered those flashbacks. There, Radcliffe Haughton Jr. reportedly shot seven women, three of them fatally, including his wife, before turning the gun on himself.
It didn’t take television crews long to reach the man’s distraught father, Radcliffe Haughton Sr., the following day. “All I can say is, I want to apologize to the people of Milwaukee who have been hurt,” Haughton Sr. told a reporter on Monday. “He did not give me any hint of what he would do.”
He did not give me any hint of what he would do.
Haughton Sr. appeared to be answering an implied question, one that’s asked either directly or indirectly of parents and other relatives every time such a tragedy unfolds—“Did you see this coming? Why didn’t you stop it?” It’s why, when Arlene Holmes told a reporter “You have the right person,” after her son allegedly went on a shooting rampage in Aurora, Colo., last summer, many assumed she was saying, “I knew it was him.” Holmes later clarified she was talking about herself, not her son. ...
These are unfair queries, says Renny Cushing, executive director of the Boston nonprofit Murder Victims’ Families for Human Rights. Cushing’s own father, Robert, was murdered in 1988, and Renny has dedicated his life to opposing the death penalty. He has worked with many relatives of murder victims and of killers over the years. Both sides grieve, but in different ways, he says.
“Being the family member of a murderer is incredibly isolating,” Cushing says. “There’s a shame attached to it, a stigma, so they remain silent about their loved one. People will impute responsibility on them for the actions of the family member. Society’s fear gets projected upon you, and you end up being pretty isolated.”
Lois Robison knows that all too well. She knew the day she found out her son had gone on a shooting rampage, she said in the fragile Texas drawl of a 79-year-old woman. That day, she recalls, she turned to her husband and said, “Now our whole lives will be different.”
She was right. Robison had talked to her son Larry just the night before, she said. He was at his sister’s house, and something was wrong. Mom was trying to talk her son into coming over, to her home in Burleson. Larry said he couldn’t.
“The next morning, I woke up and found out he was the one who killed all those people,” she said.
Read the full article.

The Way Forward: Today at the UN

In conjunction with the 67th Session of the UN General Assembly, the Special Procedures Branch of the Office of High Commissioner on Human Rights will host a side-event this evening at the UN in New York, on the topic of "The Death Penalty and Human Rights: The Way Forward." We are honored that Renny Cushing has been asked to speak at this event, representing Murder Victims' Families for Human Rights.

The event features the UN Special Rapporteur on extrajudicial, summary or arbitrary executions, Christof Heyns, and the UN Special Rapporteur on torture and other cruel, inhuman or degrading treatment or punishment, Juan Mendez. Other speakers will be representing the World Organization Against Torture, Penal Reform International, Amnesty International, and the U.S. Program of Human Rights Watch.
at 8:10 AM No comments: 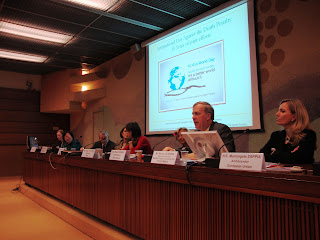 We just got this photo of Renny Cushing representing MVFHR at the panel discussion on World Day Against the Death Penalty, held in Geneva last week. Thanks to all who helped to organize this powerful event.
at 8:54 AM No comments:

Speaking out in Oklahoma

OKLAHOMA CITY — The daughter of a slain Kansas Highway Patrol trooper will join church leaders from across the state as part of an anti-death penalty initiative in Oklahoma.

Neely Goen (GOH'-ehn) and members of the Oklahoma Conference of Churches will release a theological statement in opposition to the death penalty during the event Wednesday at the Oklahoma State Capitol.

Goen is an ordained minister from Wellston whose father, Kansas Highway Patrol trooper Conroy O'Brien, was gunned down on a Kansas turnpike east of Wichita in 1978. Goen is now an advocate for the abolishment of the death penalty.

Oklahoma has executed four inmates so far in 2012, and Attorney General Scott Pruitt has asked the Oklahoma Court of Criminal Appeals to set execution dates for two other death row prisoners.

And from KOKH-TV in Oklahoma City, "A Murder Victim's Daughter Speaks Against the Death Penalty":

OKLAHOMA CITY, OK -- Opponents of capital punishment gather at the Capitol to observe the 10th World Day Against the Death Penalty.

"I am here today because I believe we need to abolish the death penalty in Oklahoma," said Bishop Michael Girlinghouse of the Evangelical Lutheran Church in America.

"There was some issues with dealing with the anger," said Goen.

Goen never knew her father. He was killed five months before she was born.

"I was a huge supporter of the death penalty until age 24 or 25 then God showed me this guy's life is worth just as much as mine," said Goen.

Goen says through her faith she came to forgive her father's killer and form a relationship with him.

"I want people to realize that everybody no matter right, no matter wrong, no matter whether they've cut you off in traffic or killed your brother, they're still a human being and all you're doing by taking them is causing more pain."

While Goen's perspective on the death penalty changed as she got older, she quickly learned not everyone would agree with her.

"I believe these people should pay the ultimate price in my opinion," said State Rep. Mike Sanders.

Rep. Sanders argues capital punishment serves as a deterrent. He also believes it holds people accountable for their actions.

Oklahoma has executed four inmates so far in 2012. Attorney General Scott Pruitt has asked the Oklahoma Court of Criminal Appeals to set execution dates for two other death row prisoners.

World Day Against the Death Penalty

Today is World Day Against the Death Penalty! This calendar of events gives a sense of what is happening today all across the globe and helps us all feel part of a worldwide effort to abolish the death penalty.

In 2007, the UN General Assembly adopted a landmark resolution on the moratorium on the death penalty, introduced by the European Union and a cross-regional group of countries. Since then, the resolution has enjoyed increasing support. However, challenges to achieving the universal moratorium and the ultimate abolition of the death sentence remain. The panel will gather activists from around the world to discuss and analyse, each from an unique perspective, the progress made over the past decade, and the remaining challenges in the worldwide campaign against the death penalty.

As always, MVFHR is honored to join with others in the international community who share our goal of abolishing the death penalty. We look forward to hearing, and sharing, more reports of the day.
at 8:37 AM No comments:

Today Renny Cushing is representing Murder Victims' Families for Human Rights at the Roundtable on the abolition of the death penalty, sponsored by the International Commission against the Death Penalty and held at the Ministry of Foreign Affairs in Madrid.

The roundtable, according to the description, "will review developments on the death penalty and identify legal and political challenges and opportunities for the coming five years." Renny, of course, will be talking about working with victims who oppose the death penalty.  We'll post more information as we get it.
at 9:20 AM No comments: