Spreading our message in Japan - Part 2 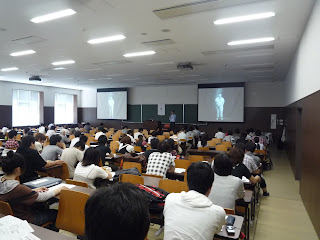 "Here, I am giving my photo presentation at Kobe Gakuin University, one of the top universities in southern Japan. One of the people who attended this presentation was a man I had met about a year and a half ago, whose brother had been murdered. When we first met, he had wanted to be involved with Ocean; then he changed his mind and became involved with victims' groups favoring the death penalty. He told me that after a while, he again began to feel that this wasn't the right way, and when he came to the presentation at Kobe Gakuin University, he was very impressed and re-affirmed his desire to become involved with Ocean and MVFHR. I think he will be a powerful spokesperson and am glad to have made this connection with him again." 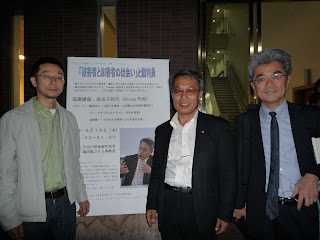 "At Doshiba University in Kyoto, with Mr. Harada and Mr. Asano, who is a professor and a board member of Ocean. Whenever I spoke at a university, the event was open to the public, so members of the community attended as well. When I give these presentations, I think many members of the audience arrive feeling that they are in favor of the death penalty and then have that belief challenged. Even the people who have helped to organize the events, and who are already opposed to the death penalty, tell me that they need to keep hearing it again and again, because they learn something and think something new each time." 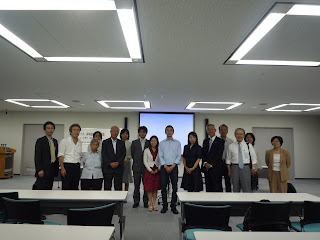 "Members of the Japan Federation of Bar Associations, where I also spoke. I don't have a photo of the final event, but it was an important one so I want to mention it: I spoke to Tokyo police officers and youth correctional officers, which was very valuable. I learned from this meeting about the bureaucracy in which Japanese police must work."
at 7:38 AM