From today's Taiwan News, "Death penalty is danger to all, Meeropol tells Taiwan": 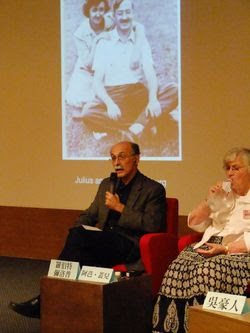 Robert Meeropol vice chair of Murder Victims' Families for Human Rights and founder of the Rosenberg Foundation for Children, speaks about his opposition to capital punishment during a 'Victims, We Care!' seminar in Taipei. The picture behind is Meeropol's parents, Julius and Ethel Rodenberg.

In an exclusive interview, Robert Meeropol, vice-chair of Murder Victims' Families for Human Rights and the founder and executive director of the Rosenberg Foundation for Children, discussed with Taiwan News Chief Editorial Writer Dennis Engbarth how his experience as a child whose parents, Julius and Ethel Rosenberg, were executed by the United States government for "conspiracy to commit espionage" at the height of the "anti-communist" Cold War period known as "McCarthyism" led to opposition to the death penalty.

Taiwan News(TN): Why did you join Murder Victims' Families for Human Rights (MVFHR)?

Robert Meeropol: I joined the MVFHR when it was founded on Dec. 10, [2004] because they were the first victims organization to recognize family members of persons who were executed as murder victims in their own right. No matter whether it is state sanctioned killing or occurs on a street, it is still murder.

MVFHR brings together immediate family members of persons who are murdered or executed and believe that capital punishment is a human rights abuse and not just a criminal justice issue.

TN: What happened to your family?

Meeropol: I was born Robert Rosenberg and was six years old on June 19, 1953 when my parents Julius and Ethel Rosenberg were executed at New York's Sing Sing Prison on charges of conspiracy, or planning, to commit espionage and not for murdering anyone.

These were vague charges that were transformed at the height of the Cold War into a claim, which was not officially part of their indictment, that they stole the secret of the atomic bomb and gave it to the Soviet Union.

They were charged for one crime, but executed for another charge.

The evidence is overwhelming that neither stole the "secret" of the atomic bomb, which in any case was an absurd notion since the atomic bomb is the product of an industry and not a formula or recipe.

In addition, my mother was not actively engaged in any illegal activity and was arrested by the government to pressure my father to confess to something which he had not done.

My father was involved with a group of young people who began to pass on military and industrial information on electronics and radio to help the Soviet Union defeat the Nazis in World War II and it is not clear when this activity ended.

The McCarthy period played a primary role but not in their arrest but in the charge of stealing atomic bomb secrets and in their execution.

My brother and I changed our names after the couple that adopted us and became the first children who had both parents executed by the United States government.

As a child who survived the execution of both of his parents, I have an unusual perspective on the death penalty from the standpoint of how does capital punishment impact the lives of the children of the executed.

TN: What do children of executed prisoners need to adjust?

Meeropol: Such children do need counselling and community support so they do not feel isolated after the execution, but thousands of times more important is that they need for their parents not to have been executed.

Relatively more enlightened people will say that there are services for children of executed convicts but the reality is that such positions miss the point which is that executing someone helps no one.

It does not ease the pain of those who had a relative murdered and killing another person will not undo that terrible act but will only bring pain and suffering to a new set of people, namely the family members and children of the executed.

TN: Why did you decide to form the Rosenberg Foundation for Children and what is its function?

Meeropol: My full time job is founder and executive director of the Rosenberg Foundation for Children, a public foundation which provides approximately US$350,000 a year in assistance for the educational and emotional needs of children or targeted activists and targeted activist youth in the United States.

We believe that all people have equal worth and that people are more important than profits and that world peace and ecological sustainability and human rights are necessities. A "targeted activist" is a person who is "blacklisted" from employment or imprisoned or hurt or worse in the course of working for these principles and their children are eligible for help from the RFC for their educational and emotional needs.

Basically, we try to help other people the way that I and my elder brother Michael were helped.

After the execution of our parents, our attorney raised a trust fund for us which provided resources for therapy and summer camps and special schools and that's what we do now.

It took me until I was 43 years old to figure out that my work in life was to repay the community of support that supported me by supporting people who need help now.

TN: How are the RFC and MVFHR connected in your work?

Meeropol: The connection between the RFC and the MVFHR is very profound.

The RFC is my positive response to the terrible thing which happened to my family and allows me to gain professional fulfilment by transcending the destruction visited on my family by helping others.

MVFHR brings together people who lost loved ones and whom have found their own positive responses in their own ways. The common thread is the positive response to terrible circumstances and the message that I and the other members of our group have is that helping others helps society and helps heal yourself.

In my case, I did not immediately oppose the death penalty. Instead, I believed that my parents had been wrongly executed and had fantasies about seeing the executions of the people who executed my parents.

Like many members of victims' families, I was also stuck in anger and revenge, but was able to find a positive channel for this anger in the RFC. For me, it was not a question of forgiveness but revenge did not matter any more as I was healing myself by trying to make something good out of a terrible thing.

TN: Why did you decide to participate on the MVFHR "Victims, We Care!" speaking tour to Asia?

Meeropol: When [Toshi Kazama], a photojournalist and a MVFHR director, invited me to travel together with him and other MVFHR members on a speaking tour to South Korea, Japan and Taiwan, I immediately agreed.

I wanted to go to Hiroshima as my parents and my family were also victims of the atomic bomb and I wanted to come to Taiwan because there is a great deal of political equivalence between the period of McCarthyism (named after Republican Senator Josephy McCarthy) of the Cold War in the United States and the "White Terror" in Taiwan that makes me feel a sense of kinship with the families of victims of the White Terror here.

TN: Since public opinion in Taiwan is strongly against abolishment of the death penalty, what do you expect your visit to achieve?

Meeropol: The bar associations in the United States and Japan are both working for death penalty moratoriums even though most people in both countries favor the retention of capital punishment.

I believe this disconnection exists in part because people who experience capital punishment directly and give it deeper thought are more likely to become opposed to the death penalty.

Support for capital punishment is broad but not very deep. Most people do not give the matter much thought and may believe that the easiest thing to do to a killer is to kill them back.

However, you can move people if you yourself has experienced the pain of a murder and show that your position comes out of hard-won and very painful personal experience. People will recognize this fact and will take you seriously.

Finally, my study of this issues shows that there has been virtually no country in which the government waited to have majority support before abolishing the death penalty.

In all cases, the majority was against abolishment, but the government has to display the leadership and vision to realize higher aspirations instead of allowing base emotions of revenge dominate society.

TN: What have you learned from your visit to Taiwan?

The lesson about capital punishment is that if you allow the government the power of life or death over you, sooner or later the government will abuse this power and kill innocent people.

Capital punishment is a human rights abuse and it is unacceptable in a democratic society that governments have the right of life or death over its citizens.

It is also sadly ironic that the government here is now acting more like the government in the People's Republic of China, which is the world's biggest executioner state, by resuming executing people in a dangerous convergence.

The positive aspect in Taiwan is that there is now a discussion, even if it is somewhat one - sided. The initial state of facing this issue is education and for talking. The more reasoned and measured the discussion is and the more respectful we can be with each other in the process of disagreeing, the more our society will learn how to cope with contentious issues and the more the level of violence in society will decline.
at 8:39 AM